BTS Is “Dynamite” In Their Animated 2020 VMA Performance 🧨✨MTV 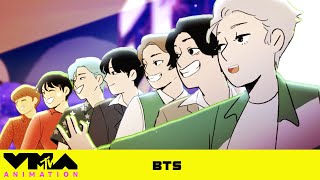 Oh no, BTS overslept and now they’re running late to the VMAs! Find out if they make it to the main stage in time to perform in this animated tribute to their 2020 VMA performance of “Dynamite!”

Paramount+ is here! Stream all your favorite shows now on Paramount+. Try it FREE at https://bit.ly/3qyOeOf

#MTV is your destination for the hit series WNO, VMA, Jersey Shore, The Challenge, MTV Floribama Shore, Teen Mom and much more!